Search and Sort With The Ransack Gem

This last week I spent some time learning .Net 3.1, as well as .Net 5. I had some requirements for searching and sorting in both .cshtml pages, as well as razor components. At some point, I began to wonder how quickly I could have done this in Ruby on Rails instead.

The natural progression, of course, was that I would rediscover the Ransack Gem. This gem is absolutely amazing for bootstrapping search and sort functionality into an application. For reference, this video tutorial took around 15 minutes to learn to set up.

In this tutorial we’ll cover setting up the Ransack gem with some seeded Faker data. We’ll create an articles model that has both a title and a body. Afterwards, we’ll search and sort both columns, and combine the search forms into one form.

In future tutorials, my plan is to cover how to search and sort on associations. Then we’ll hopefully cover some more advanced features, such as custom queries and custom sort links. These will allow the Ransack Gem to scale to a production search solution.

All of this code is available at this GitHub repo.

The first step is going to be adding the Ransack and Faker gems to our gemfile. Once we run our bundle command, we can then generate the article scaffold and migrate the database. After we migrate, we can seed the database.

The controller is fairly straight forward. You’re just going to have to insert some logic for the query based on the parameters you were passed. This can become fairly involved, but for this tutorial you’ll just have to modify your index method to match mine.

For the index page, we simply need to add the partial render on line 5, which will give us a search form. We can then modify the headers on line 9 and 10 from “Title” and “Body” to be the sort_links shown below.

And there you have it, an application with searching and sorting in a very short amount of time. I’ve included a preview of the finished project, which again is available on GitHub. I think how quickly this was implemented is a testament to how effective the Ransack Gem is.

You add the gem, Ransack your MVC where appropriate, and you’re off to the races. You very rarely need custom routes, helpers, or jobs that come with a hand-built search solution. If you’d like to see more than just the image of the finished project, this blog was based on this video on my YouTube channel. 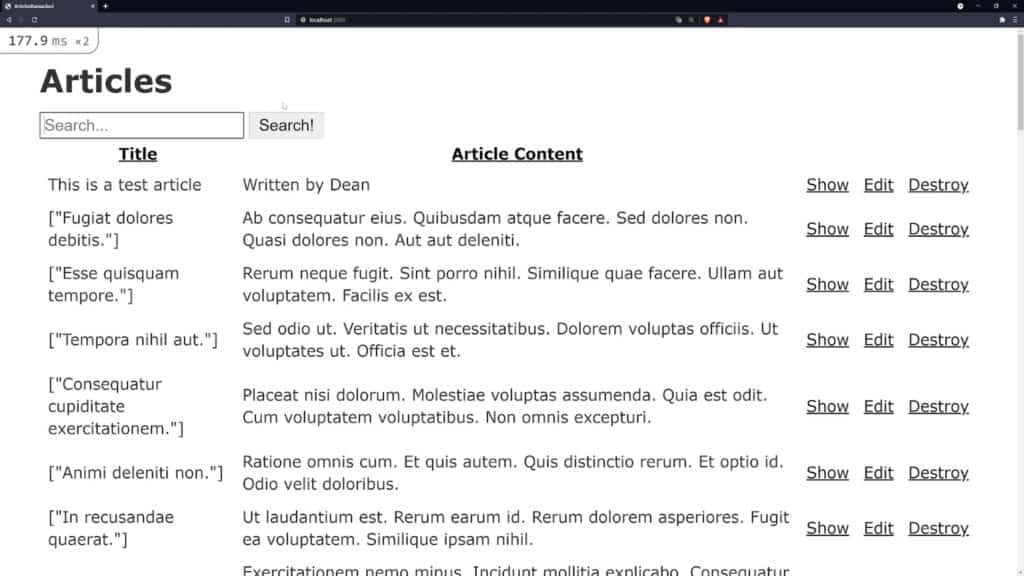